"In music composition and arranging, voicing is the vertical spacing and ordering of the notes in a chord (which notes are on the top, middle and bottom and which octave each is in). Which note is on the bottom determines the inversion." From Wikipedia, the free encyclopedia.

Both of the above are C triads in root position (the root is the bass note.) The 1st chord is close position: root - 3rd - 5th

There are many ways to voice a chord, as the examples below will show. Piano chord voicing is MOST OFTEN divided between both hands. The left hand usually covers a 5th, octave and sometimes a 10th - the right hand usually has smaller intervals.

When playing from a LEAD SHEET or FAKE BOOK, the right hand also usually keeps the melody note on top!

Here is that same broken chord harmonized in close voicing in the right hand:

Here is that same broken chord harmonized in open voicing. The notes are spread between both hands.

Now, here is that same broken chord treated a little differently. The right hand is played with close voicing while the left hand plays a pedal-point bass on an octave C.

Any one of the above examples is OK. Each version is played differently and sounds different.... but they are all OK!

Next is a melody in the right hand and the chord played in close voicing in the left hand.

Here is that same melody with the chord in open voicing. The chord is spread between the left hand and the thumb of the right hand.

Piano chord voicing follows some basic guidelines when playing from a lead sheet or fake book:

Using some substitute chords and different voicings, here are five different versions of that same turnaround. The first is:

This is the same progression, but notice how the piano chord voicing is different. 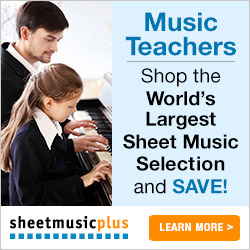 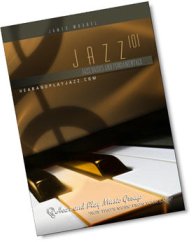 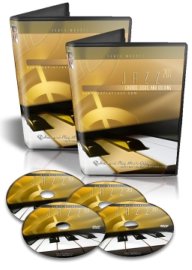